Tapping Into Your Roots: A Genealogy Event

You are here: Home1 / Events2 / Tapping Into Your Roots: A Genealogy Event 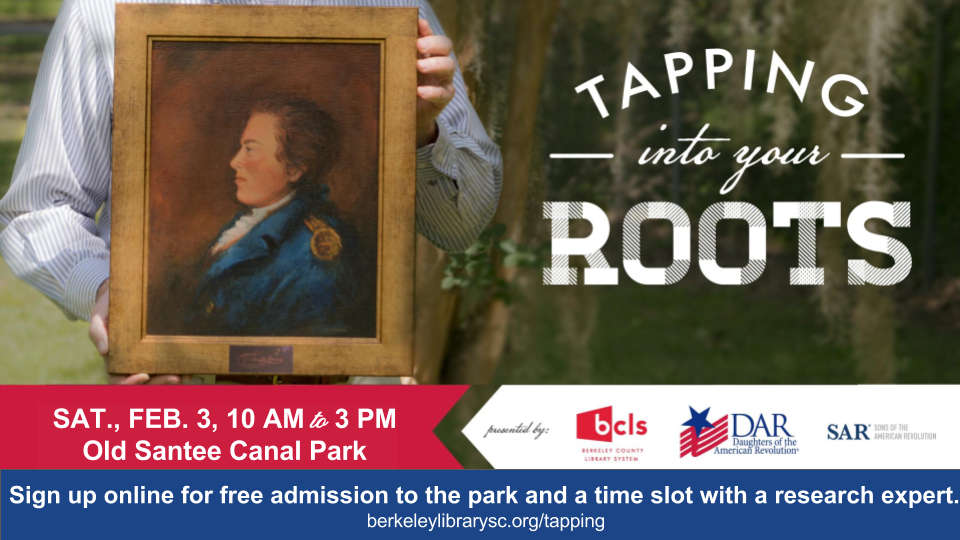 Curious About Your Family History?

You could have an ancestor who helped secure independence for the United States of America!

Regardless of race, religion, ethnic background, age or origin, if you have a desire to learn more about your ancestors, join the Berkeley County Library System and members from the local chapters of the Daughters, Sons, and Children of the American Revolution for a genealogy event. Each of these volunteer organizations actively promote historic preservation, education, and patriotism.

More About the Co-Hosts

In Moncks Corner, SC on October 24, 1999, twenty-four ladies organized a chapter of the National Society Daughters of the American Revolution. The chapter exists because of the efforts of Sallie “Kitty” Mescher, who had the vision to create a DAR chapter in Berkeley County, SC where so many American Revolution battles and skirmishes were fought from 1780 to 1782. The chapter name of General Marion’s Brigade was chosen to honor the native son of Berkeley County and the men who served with him. Francis Marion was known as the Swamp Fox for his ability to do the most with the least in the difficult terrain of the Lowcountry of South Carolina. To honor the efforts of these Patriot ancestors in the cause of Liberty, all activities of General Marion’s Brigade are focused on preserving history, promoting education and encouraging patriotism.

DAR members come from a variety of backgrounds and interests, but all share a common bond of having an ancestor who helped contribute to securing the independence of The United States of America. Any woman 18 years or older, regardless of race, religion or ethnic background, who can prove lineal descent from a patriot of the American Revolution is eligible to join. Daughters are vibrant, active women who are passionate about community service, preserving history, educating children, as well as honoring and supporting those who serve our nation.

The Objects of this Society are declared to be patriotic, historical, and educational; to unite and promote fellowship among the descendants of those who sacrificed to achieve the independence of the American people, to inspire them and the community-at-large with a more profound reverence for the principles of the government founded by our forefathers; to foster true patriotism; to maintain and extend the institutions of American freedom.