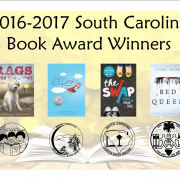 The students of South Carolina have chosen:

Since 1976 when sixteen schools participated, the book award program has been expanded to include more than 500 schools and more than 60,000 students participating in the program. The South Carolina Book Award Program includes a vetting process for each of the four levels of books. Committees composed of school librarians, public librarians, teachers, parents, and students read hundreds of books to create a list of 20 books for each level. Students who have read a minimum of three books for each of the YABA or JBA levels and a minimum of five books for the PBA or CBA levels vote in February for the book they feel is the best. Free Movies Under the Stars Returns to Moncks Corner Recreation Complex this...
Scroll to top
Translate »