Stories of a Civil War Hero At Daniel Island Library

You are here: Home1 / Events2 / Stories of a Civil War Hero At Daniel Island Library

Stories of a Civil War Hero At Daniel Island Library 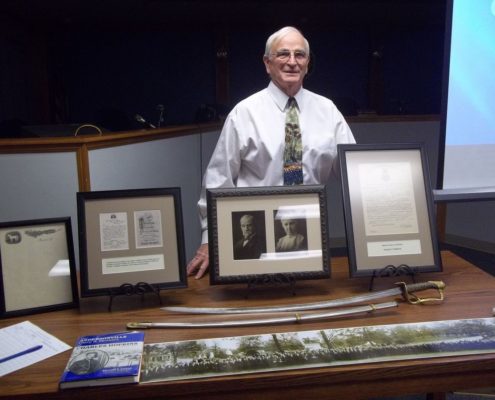 Boonton Township resident Charles Maraziti stands by items that represent his great-grandfather Charles Fern Hopkins, a Civil War veteran, and survivor of the Andersonville prison camp. Maraziti conducted a lecture on his ancestor’s life and accomplishments at the Boonton Township Town Hall to a crowd of more than 40 people. Photo by Anthony Lusardi

Charles Maraziti will present an audio-visual program on the amazing life of his Great-Grandfather, Charles F. Hopkins, a Civil War veteran from New Jersey who served under General Philip Kearny with the First New Jersey Brigade. Hopkins survived battles only to be captured and incarcerated in Andersonville Prison in Georgia, from which he managed to escape twice. Following his service, he was awarded the Medal of Honor for his selfless act of heroism at the Battle of Gains Mill, VA, in 1861.

Hopkins is also a recognized hero of the “Underground Railroad,” helping to transport runaway slaves to freedom in the north. Following the war, he dedicated his life to public service.  Maraziti’s presentation will include a display of Hopkins’ Medal of Honor certificate, and other Civil War artifacts.

Charles Maraziti and his wife, Pat, live in Boonton New Jersey, however, have owned a second home here on Daniel Island since 2003. Charles managed Consumer and Mortgage lending departments for major banks in New Jersey and NYC until he retired in 2008.

MORE: Story from The Citizen of Morris County News

Many residents don’t know much about Charles Fern Hopkins.

Most, more than likely, have never even heard of him.

“So many things about this man are amazing,” said Maraziti, as he started the lecture.

“I used to say I could talk seven hours about this man, but now I can talk 15 hours because I’ve learned so much more about Hopkins. But I have only 45 minutes here.”

Maraziti is a Boonton Township resident who is a retired banker. He has conducted lectures on Hopkins as “a little hobby” since 2010, often at museums and Civil War events. Growing up and learning about his ancestor, Maraziti was very much influenced and inspired to tell the man’s story.

“Charlie has inspired me for my entire life,” said Maraziti.

“From all the tales that my mother would tell me, he was just an amazing man. And learning the essence of this man, what he was all about, and how humble he was, he became my role model. Whenever I was in a situation, I would think ‘What would Charlie do?’” 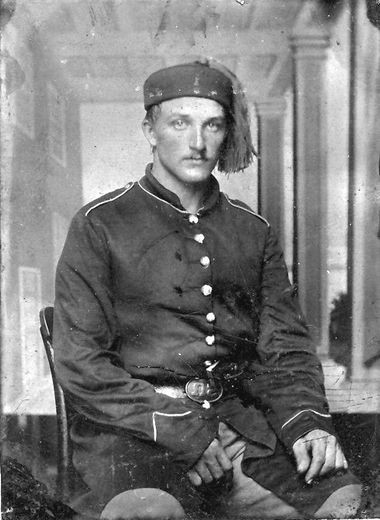 The story of Charles Fern Hopkins started in Hope, where he was born on May 16, 1842. At six, his family moved to the town of Drakesville (now Ledgewood). Then in 1855, the Hopkins family moved to Powerville (now known as Boonton Township) where Nathan Hopkins, Charles’s father, ran a harness-making business. Nathan was also the lock tender on the Morris Canal and operated the Powerville Hotel near the lock. Charles learned the harness-making trade from his father and assisted him in the lock. But another task was already being instilled upon the young boy.

The Hopkins home was a station of the Underground Railroad in northern New Jersey. Living in a household that didn’t believe in slavery, young Charles would spend many nights assisting slaves in their passage to freedom, according to his relative. His job was transporting runaway slaves to the next station. Though the threat of capture was always apparent, Hopkins feared more of failing his father who had instilled courage and faith in him which the young man needed to stay strong and brave.

“Lots of transported slaves went through New Jersey and New York on their way to Canada,” said Maraziti as he spoke a little on the Underground Railroad from the 1830s to the 1860s.

“Some slaves went up the Delaware River and traveled alongside the Morris Canal.”

In 1861, the firing upon Fort Sumter in South Carolina, and the breakout of the Civil War, at the age of 18 and without his father’s consent or knowledge, Hopkins enlisted into the Union army. He would join as a private with Company I of the 1st New Jersey Volunteer Infantry, which was led by famed Gen. Philip Kearny of the Brigade of Jersey Blues—comprised of the 1st, 2nd, 3rd, and 4th New Jersey Regiments. Known for his loyalty to the men he commanded, Kearny would inspire a deep sense of patriotism and courage within Hopkins, much like how the young soldier’s father had done, according to Maraziti.

“Having as his commander, a one-armed general who lost his right arm during the Mexican-American War, Hopkins felt that if Kearny could go to war with one arm, he could go with both,” said Maraziti.

The first time that Hopkins and the whole 1st New Jersey Infantry experienced a major engagement on June 27, 1862, during the Seven Days’ Battle at Gaines’s Mill, just seven miles from Richmond.

During the battle, Hopkins was wounded twice and rescued his own wounded sergeant, carrying him 1,200 yards to safety under heavy fire. He later returned to the battlefield but received a third wound that forced him to be taken to a field hospital and subsequently transported to a Baltimore, Maryland hospital for a 16-month recovery. Once fully recovered, Hopkins returned to his unit, not knowing that the worst was still yet to come.

Hopkins later fought at the Battle of the Wilderness in Fredericksburg, Va., where he witnessed many wounded soldiers burned alive from the blazing battlefield, ignited by the gunfire.

“During the night, the only thing heard was the screaming of men being burned alive,” said Maraziti.

He was later captured by Confederate soldiers three days before his enlistment was to end and at the time began a diary documenting his ordeal.

As a prisoner-of-war, then 22 years of age, Hopkins was sent to the infamous Andersonville Prison, in Americus, Ga.

There, Hopkins was among 35,000 other POWs cramped into a 26-acre open area without any shelter from the elements, described as a “hell on earth,” where many prisoners died of starvation, dehydration, and disease. Over the 14 months of its existence, 45,000 POWs would pass through the “Gates of Hell” at Andersonville, with 13,000 dying there.

Hopkins attempted to escape three times, but was captured in all cases and often publicly tortured as an example to discourage other prisoners. At the same time, he would often support other prisoners and help them survive the prison ordeals. He was also able to keep a diary of his prison experiences at Andersonville.

“Just think and imagine, if you can, what your thoughts would be to see a father, son, a brother, or even a comrade, not related, slowly but surely becoming a mere skeleton, a maniac, appealing continuously for something to eat, talk of home, friends, in his delirious spells; knows you not—you, helpless to do more than endeavor to live yourself, cheer him up when your heart is breaking, and do not believe your promised hopes to him,” said Hopkins in his diary.

“These were the hours that tried the mental strength of the “man,” and were a hundred times worse than the thoughts of a hundred Gettysburg or Chickamauga battles.

“One was to die in glory under the folds of that flag which he was sworn to defend and be among his comrades; dying at the post of duty. The other was to rot in misery and degradation among blood of our blood, kin both by blood and country,” Maraziti said.

The Diary of Hopkins was donated to the Prisoners of War Museum of America, located at the national park in Andersonville, Ga.

Near the end of the Civil War, Hopkins and other comrades were transported to Florence Prison, in South Carolina. A month before the war ended, the prison was closed and Hopkins was abandoned because he was gravely ill at the time and not expected to survive.

However, Hopkins crawled out of the unoccupied prison camp and was able to get on a train to the North. He arrived in Boonton just three days before his planned funeral, for his family had thought he had died at the time he was transferred to Florence Prison.

With the Civil War over, and his health finally restored, Hopkins lived the rest of his life in Boonton. He continued his harness-making businesses and became more devoted to public service. He served as mayor of Boonton, postmaster, fire chief, a Morris County Freeholder and New Jersey Assemblyman. In 1867, he married his wife, Hettie Van Duyne, with whom he would have nine children.

Hopkins also made efforts to recognize his general Philip Kearny who had been killed in action during the Battle of Chantilly in 1862. As president of the Kearny Commission, Hopkins had monuments erected at Chantilly to mark the area where General Kearny and General Isaac Stevens fell and died during the battle.

Then in 1912, Hopkins had Kearny disinterred from his unmarked grave at the Trinity Church Cemetery in New York City, and re-buried with full military honors at the Arlington National Cemetery, in Virginia.

For his efforts in rescuing his sergeant during the Civil War Hopkins was awarded the Medal of Honor but turned it down for he felt his actions were not extraordinary.

However, with the pleading of his family, he finally accepted the honor in 1927 when the Secretary of War who visited him in Boonton. The Medal of Honor is now housed at the Boonton Historical Society Museum.

“There is a popular country song, ‘’Always Be Humble and Kind’’ by Tim McGraw that I think captures the essence of Charles Hopkins,” said Maraziti.

“He was always helping others and not looking for anything in return: slaves seeking freedom, wounded soldiers in need of help, POWs in need of food and water, and his life of giving through public service. We can all learn great life lessons from this amazing man.”

Charles Fern Hopkins died on Valentine’s Day in 1934. He was buried beside his wife, who had died four years earlier, in the Greenwood Cemetery in Boonton.

Among his papers found after his death was a poem that Hopkins wrote himself.

“The world is what you make it,” said Hopkins.

“Then make it bright and true,

“And when you say it’s gloomy

Thank You for Joining the Friends!