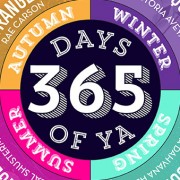 A book a day keeps the doctor away! We predict that this will be your best reading year yet and to help make our prediction come true, we created the only 2015 calendar YA book lovers will ever really need. We have compiled a *full* reading list, with book recommendations for every season, month, week and day of 2015. This is our biggest infographic yet and one that will keep you going all year long! Pull up your Goodreads add to shelves, Amazon wishlists and however else you track what you want to read, because your to-be-read pile is about to get WAY bigger. #SorryNotSorry

We make our infographics available for download for free! Included with the full graphic, we have also included in the PDF printable sections by seasons! Click here to access & print the full size, hi-res PDF!

(Click the image below to view it at a much larger size!)

Click on the seasonal breakdowns below to view them at a larger size! (These are also included in the PDF download we posted about above.)

HERE’S HOW IT WORKS

We have broken down the year into seasonal, monthly, weekly and daily book recommendations. Read on for the complete breakdown of books!

The best way to read this is to print out a copy and then rotate it as the year goes on.

If you’re going to read one book per season this year, let it be these highly anticipated reads!

For your weekly YA reading recommendations, we chose series you absolutely need to binge. All of these series are complete so there will be no waiting for book 2 or 3!

SHATTER ME by Tahereh Mafi
REVOLUTION 19 by Gregg Rosenblum
THE GRISHA TRILOGY by Leigh Bardugo
HEMLOCK by Kathleen Peacock
THE MADMAN’S DAUGHTER by Megan Shepherd
DIE FOR ME by Amy Plum
UNEARTHLY by Cynthia Hand
DARKEST MINDS by Alexandra Bracken
FIRELIGHT by Sophie Jordan
DELIRIUM by Lauren Oliver
DIVERGENT by Veronica Roth
INCARNATE by Jodi Meadows
PROPHECY by Ellen Oh
DARKEST POWERS series by Kelley Armstrong
TAKEN by Erin Bowman
UNDER THE NEVER SKY by Veronica Rossi
UNWIND by Neal Shusterman
THE SELECTION by Kiera Cass
DEFIANCE by C.J. Redwine
INTERWORLD by Neil Gaiman
LEGEND by Marie Lu
EVERNEATH by Brodi Ashton
PRETTY LITTLE LIARS by Sara Shepard
OLD KINGDOM series by Garth Nix
RUSH by Eve Silver
EVE by Anna Carey
DUST LANDS by Moira Young
INSIGNIA by S.J. Kincaid
CITY OF BONES by Cassandra Clare
PARTIALS by Dan Wells
CHAOS WALKING by Patrick Ness
SOMETHING STRANGE AND DEADLY by Susan Dennard
THE LUNAR CHRONICLES by Marissa Meyer
THE GIRL OF FIRE AND THORNS by Rae Carson
ASYLUM by Madeleine Roux
I AM NUMBER FOUR by Pittacus Lore
DAUGHTER OF SMOKE AND BONE by Laini Taylor
GONE by Michael Grant
DON’T TURN AROUND by Michelle Gagnon
THRONE OF GLASS by Sarah J. Maas
WHAT’S LEFT OF ME by Kat Zhang
BORN OF ILLUSION by Teri Brown
MILA 2.0 by Debra Driza
THE BODY FINDER by Kimberly Derting
PARANORMALCY by Kiersten White
THE LUXE by Anna Godbersen
THE HUNGER GAMES by Suzanne Collins
WICKED LOVELY by Melissa Marr
SPELLCASTER by Claudia Gray
THE BURNING SKY by Sherry Thomas
THE RAVEN BOYS by Maggie Stiefvater
CRASH by Nicole Williams

A BOOK A DAY

If you still need book recommendations (we wouldn’t be surprised if you do!) then we’ve chosen a book a day for you! Most of the books on this list are standalones for first and second books in series or coming out in 2015! The Berkeley County Library System offers several of these titles in our collection. If we don’t have and you want it – Let us know!