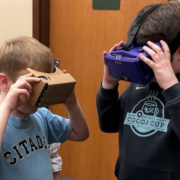 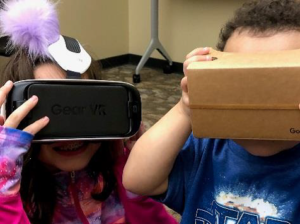 Students at the Goose Creek Library’s Homeschool Meetup are thrilled to learn more about VR with kits from the South Carolina State Library.

In January even after the snow storm, 26 children and 8 adults came to the Goose Creek Library for some excitement and fun learning in the new Homeschool Meetup Program. This new program, coordinated and hosted by BCLS’s Young Adult Librarian, BriAnne Baxley, has had tremendous success connecting homeschool students in the area and providing a fun educational opportunity centered around various topics. Each program begins with a book reading that goes along with the topic for the day. Baxley explains “This helps draw them in and to get them started thinking of what their activity might involve. In one particular meeting, the children were inspired by a STEM book about a little girl who kept trying to fly and that not giving up is the real success. They were then broken up into small groups and had 10-15 minutes at each center. Centers consisted of STEM kits that BCLS has in their possession like snap circuit kits and things of that nature. However, the most exciting kit came from the State Library and it was the Virtual Reality Kit. Even the parents got into the action and everyone had a great time.” 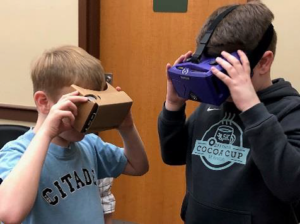 Students at the Homeschool Meetup learn about Virtual Reality with various VR kits including the Google Cardboard VR headset.

In March, Those in attendance at the Homeschool Meetup had an “egg”cellent time. At a previous meetup, the students talked about flight and air. They made paper airplanes and talked about why (or why not) their creations flew the way they did. Baxley says,”This lesson helped them prep for the following meeting during which they created a parachute or some kind of holder that would help them get an egg to safety when dropped. These eggs were not cooked so it added to the “ick” factor.” During this program, BriAnne climbed up on a ladder and dropped each one at the same height and the children would race to see if it was cracked. “We had some to crack on impact, some to crack slightly when they accidentally rolled out and some that never cracked! The children would cheer or “aww man!” depending on what happened. The children had a fantastic time and the parents kept talking about how wonderful the lesson was.” BriAnne is just excited about the excitement that the families bring and is appreciative of all the extra hands that the parents bring to make these activities go so smoothly.

In January, the Virtual Reality Kit made its way to the “The Laboratory” at Hanahan Library. Those who participated took turns being on the moon, riding on water slides, and playing interactive games. Branch Manager at Hanahan Libary, Karen Altman says, “Though a small group, it was the perfect size for this activity. We even had one 3-year old who wanted to participate so he was given “one” to play with. Have no fear it was a cardboard one from Google that had no technology attached to it.” Parents who were also in attendance also had a fantastic time and were 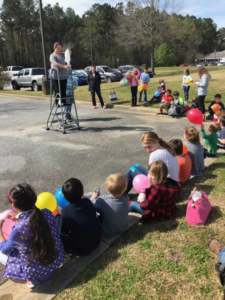 Mrs. BriAnne test the students’ egg parachutes by dropping them from a raised elevation. Several of them did not break!

interested in how they could have one for their own. BCLS is very appreciative of the State Library for providing kits such as this one to enhance programming without the budget constraints that purchasing on our own may cause.

Altman continues “Crazy what a few toothpicks, some jelly beans, and one Peep will create.” Those in attendance of The Laboratory at Hanahan in March were asked to create a protective shelter for their Peep Bunny. They could use as many of the items available as they wanted as long as it could hold up a book. Those in attendance were super creative and thought about their structure on all sides. They were able to test out their structure and then fix it for another go around afterward. “While the Peep was not always safe the tweens sure did have fun,” comments Altman.

The STEM activities continued at the St. Stephen Library with BCLS’s tech team, dubbed TechGirlz, who hosted a series of tech workshops targeted for girls. In March, teens were able to learn more about 3D printing by designing a bangle bracelet in Autocad’s TinkerCad 3D Modeling program. They learned the basics of 3D modeling and various professional 3D modeling software. Each participant was able to design and print their own bracelet. In April TechGirlz introduced virtual reality to the participants. During the program, teens were able to learn how VR works from a technical standpoint, build their own VR headset, and then used their own headsets to take a virtual trip around the library.

We Are Making it Easier for Customers
Scroll to top
Translate »

ALL BCLS locations will open to the public with limited hours on Monday, June 1, 2020
and will continue Curbside Pickup Services. Standard operating hours will resume on Monday, June 8.