Children’s books to celebrate Black History Month and “the joys and challenges that are shared by children of all colors as they learn and grow.” [readingrockets.org] 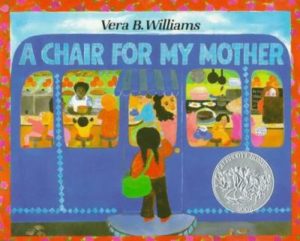 A Chair For My Mother, Williams, Vera B.

This classic and award-winning picture book was written and illustrated by the celebrated Vera B. Williams and was named a Caldecott Honor Book by the American Library Association. “A tender knockout . . . it’s rare to find much vitality, spontaneity, and depth of feeling in such a simple, young book.”–Kirkus Reviews

After their home is destroyed by a fire, Rosa, her mother, and grandmother save their coins to buy a really comfortable chair for all to enjoy. A Chair for My Mother has sold more than a million copies and is an ideal choice for reading and sharing at home and in the classroom. “A superbly conceived picture book expressing the joyful spirit of a loving family.”–The Horn Book 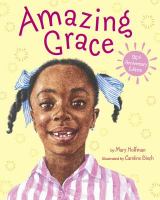 Grace loves stories, whether they’re from books, movies, or the kind her grandmother tells. So when she gets a chance to play a part in Peter Pan, she knows exactly who she wants to be. Remarkable watercolor illustrations give full expression to Grace’s high-flying imagination. 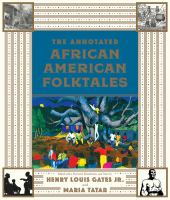 Collected for the first time, these nearly 150 African American folktales animate our past and reclaim a lost cultural legacy to redefine American literature.

Drawing from the great folklorists of the past while expanding African American lore with dozens of tales rarely seen before, The New Annotated African American Folktales revolutionizes the canon like no other volume. Henry Louis Gates Jr. and Maria Tatar assemble a groundbreaking collection of folktales, myths, and legends that revitalize a vibrant African American past untainted by romantic antebellum sentiment or counterfeit nostalgia. Beginning with introductory essays and 20 seminal African tales as historical background, Gates and Tatar present nearly 150 African American stories, among them familiar Brer Rabbit classics, but also stories like “The Talking Skull” and “Witches Who Ride,” out-of-print tales from the 1890s Southern Workman, and stories that finally incorporate Caribbean and Latin American literature within the canon. With illuminating annotations and revelatory illustrations, The New Annotated African American Folktales reminds us that stories not only move, entertain, and instruct but, more fundamentally, inspire and keep hope alive. 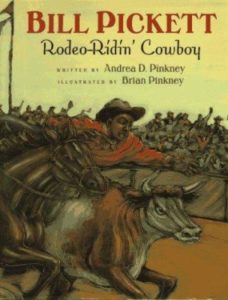 This is the true tale of the feisty cowboy-child who became the most famous black rodeo performer who ever lived. A note about the history of the black West and a bibliography are included. “The text is fascinating, and the oil paintings on scratchboard are full of energy and motion, matching the book’s powerful mood.”– School Library Journal 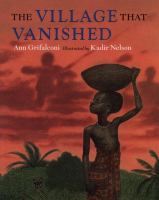 The village that vanished by Grifalconi, Ann

Young Abekenile and all the villagers of Yao feel safe sheltered deep within the jungle. But word has now come that slavers are on their way! Abekenile looks to the women of her tribe: her mother, who comes up with a clever plan to fool the slavers, and a tribal elder, who stays behind to face the slavers, steadfast in her trust that the ancestor-spirits will watch over her. But as the villagers retreat within the forest, it is Abekenile who finds that she too has the bravery and daring to help her people stay safe and free. 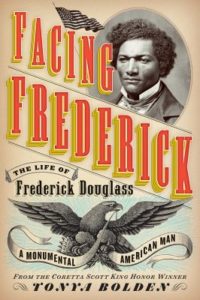 Frederick Douglass (1818-1895) is best known for the telling of his own emancipation. But there is much more to Douglass’s story than his time spent enslaved and his famous autobiography. Facing Frederick captures the whole complicated, and at times perplexing, person that he was. Statesman, suffragist, writer, and newspaperman, this book focuses on Douglass the man rather than the historical icon. 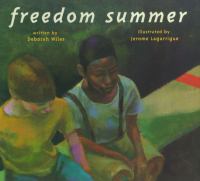 John Henry swims better than anyone I know.
He crawls like a catfish,
blows bubbles like a swamp monster,
but he doesn’t swim in the town pool with me.
He’s not allowed.
Joe and John Henry are a lot alike. They both like shooting marbles, they both want to be firemen, and they both love to swim.
But there’s one important way they’re different: Joe is white and John Henry is black and in the South in 1964, that means John Henry isn’t allowed to do everything his best friend is.
Then a law is passed that forbids segregation and opens the town pool to everyone. Joe and John Henry are so excited they race each other there…only to discover that it takes more than a new law to change people’s hearts.
This stirring account of the “Freedom Summer” that followed the passage of the Civil Rights Act of 1964 powerfully and poignantly captures two boys’ experience with racism and their friendship that defies it. 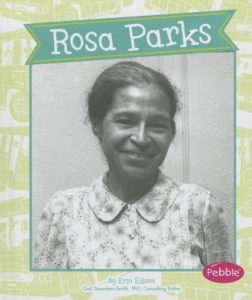 Known as the “Mother of the Civil Rights Movement,” Rosa Parks sparked a fight for equal rights.nbsp; Photographs and easy-to-read text tells the story of this great woman in history. 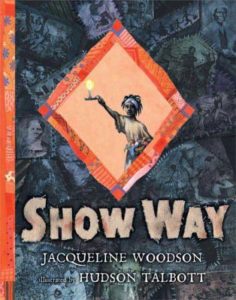 Soonie’s great-grandma was just seven years old when she was sold to a big plantation without her ma and pa, and with only some fabric and needles to call her own. She pieced together bright patches with names like North Star and Crossroads, patches with secret meanings made into quilts called Show Ways — maps for slaves to follow to freedom. When she grew up and had a little girl, she passed on this knowledge. And generations later, Soonie — who was born free — taught her own daughter how to sew beautiful quilts to be sold at market and how to read.

From slavery to freedom, through segregation, freedom marches and the fight for literacy, the tradition they called Show Way has been passed down by the women in Jacqueline Woodson’s family as a way to remember the past and celebrate the possibilities of the future. Beautifully rendered in Hudson Talbott’s luminous art, this moving, lyrical account pays tribute to women whose strength and knowledge illuminate their daughters’ lives. 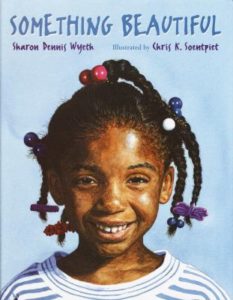 Something Beautiful by Wyeth, Sharon Dennis

Ages 4^-8. The setting is the drama in this picture book: a small African American girl in a scary neighborhood tells how she searches for something beautiful. In the view from her window, there is trash, broken glass, a brick wall. Someone has scrawled “Die” on the front door of her building. A homeless woman sleeps wrapped in plastic. The alleys are dark and dangerous. The child asks people for something beautiful, and she finds it in the warmth of the local diner, at the friendly fruit stall, with her friends at play, holding her aunt’s baby, and, finally, when her loving mother comes home from work. The message is heavily spelled out, but, as in Grimes’ Jazmin’s Notebook, reviewed on p.228, there is both realism and hope. Soentpiet’s stunning illustrations catch the neighborhood close-up from different perspectives: the diner, the launderette, the crowded playground, the homeless on the sidewalk. There is character and beauty without sentimentality in individual people and the community between them. –Hazel Rochman 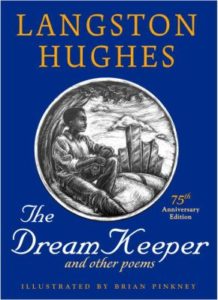 The dream keeper and other poems: including seven additional poems by Hughes, Langston

“HOLD FAST TO DREAMS / For if dreams die / Life is a broken-winged bird / That cannot fly.”

The Dream Keeper, the great African-American writer Langston Hughes’s only collection of poems for children, includes some of his best-loved works. It is being reissued in a handsome hardcover edition in celebration of its 75th anniversary. Filled with elegant scratchboard illustrations by Caldecott Honor winner Brian Pinkey, and featuring an introduction by noted children’s poet Lee Bennett Hopkins, this gift edition is sure to be cherished by young readers and longtime poetry lovers alike. 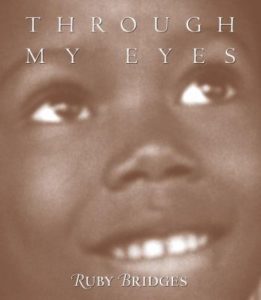 Through My Eyes by Bridges, Ruby

On November 14, 1960, a tiny six-year-old black child, surrounded by federal marshals, walked through a mob of screaming segregationists and into her school. From where she sat in the office, Ruby Bridges could see parents marching through the halls and taking their children out of classrooms. The next day, Ruby walked through the angry mob once again and into a school where she saw no other students. The white children did not go to school that day, and they wouldn’t go to school for many days to come. Surrounded by racial turmoil, Ruby, the only student in a classroom with one wonderful teacher, learned to read and add.

This is the story of a pivotal event in history as Ruby Bridges saw it unfold around her. Ruby’s poignant words, quotations from writers and from other adults who observed her, and dramatic photographs recreate an amazing story of innocence, courage, and forgiveness.

Ruby Bridges’ story is an inspiration to us all. 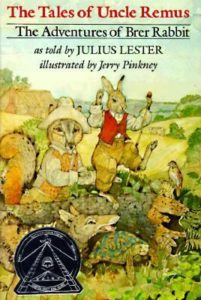 The tales of Uncle Remus: the adventures of Brer Rabbit by Lester, Julius

Generations of children have been captivated by the hair-raising adventures and misadventures of Brer Rabbit. Come along as he sneaks into Mr. Man’s garden, persuades Brer Wolf to be burned in a hollow log, and kicks Brer Fox’s Tar Baby. Jerry Pinkney’s lively and humorous illustrations are a perfect match for Julius Lester’s contemporary approach, which expertly introduces a modern sense of humor to these forty-eight tales while paying homage to their roots as traditional American folklore. 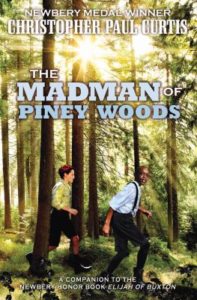 The Madman of Piney Woods by Curtis, Christopher Paul

Benji and Red couldn’t be more different. They aren’t friends. They don’t even live in the same town. But their fates are entwined. A chance meeting leads the boys to discover that they have more in common than meets the eye. Both of them have encountered a strange presence in the forest, watching them, tracking them. Could the Madman of Piney Woods be real?

In a tale brimming with intrigue and adventure, Christopher Paul Curtis returns to the vibrant world he brought to life in Elijah of Buxton. Here is another novel that will break your heart — and expand it, too.